International Human Rights Day – We strongly condemn the recent spate of red-tagging among our leaders in social media which aims to delegitimatize, vilify, and discredit our organization has done for the past 9 years. This recent episode of red-tagging came out after BIEN’s logo, along with other cause-oriented groups, was included and flashed in one of the slideshows during the Senate hearing on red-tagging, maliciously maligning our organization as CPP-NPA recruiters and involved in terrorist activities.

Among those leaders are Mylene Cabalona (President), Emadee Pangaliman (VP Internals), Sarah Prestoza (VP Externals), Joel Capulong (VP for Luzon), Rico Hababag (Secretary-General), Harmonie Cui (Auditor), Kris Tala (Paralegal Officer), and Lean Porquia (former President). Most of those who were red-tagged are members of the National Executive Board duly-elected by the General Assembly held in 2018 and attended by members from different chapters and regions.

We have seen a pattern of an orchestrated attack against us after our Bacolod organizer, Anne Krueger, was illegally arrested in aid of a faulty warrant in October 2019. A few months before the raid in Bacolod, photos of BIEN activities and leaders made rounds in social media used as a smear campaign noticeably designed to accused us of being CPP-NPA front organization.

We are disappointed but not surprised that another round of attack will come into play as red-tagging had been condoned and gradually institutionalized by government officials themselves. We are angry that our hard-earned taxes are being used wrongly in red-tagging rather than addressing legitimate issues and concerns of BPO workers. We deplore this culture of hate, false claims, and misleading perception towards our organization as this has greater risks on the safety and security of our leaders and members. The blanket approach of guilt by association through red-tagging has become part of the new normal during this pandemic, alongside BPO workplace issues such as floating while hiring, mass layoffs, forced leaves under a no work no pay scheme among many others.

Even before and at the onset of the pandemic, we are actively participating in social dialogues in various degrees or levels with policymakers, government agencies, and BPO companies through petitions and lobby work. Also, we continue to engage in tri-partism through the BPO Industry Tripartite Council (BPO-ITC).

We are very active in collaborating with partner unions in the United States, Canada, Australia, New Zealand, India, and even global unions. As an internationally recognized labor organization, we have a proven track record of protecting and promoting BPO workers’ rights and welfare and has always been in the forefront to bring positive changes in the workplace.

We stand that red-tagging has no place in a democracy and will further shrink the democratic space for sectors like the BPO workers. We have never been involved in any violent or terrorist activities. Our work is primarily focused on exercising the right to petition the government for a redress of grievances and to uphold BPO workers’ rights and welfare. As we continue to keep our economy afloat thru our taxes, the least that we expect from our government is to not engage us in red-tagging but to address deplorable working conditions.

We will not sit idly against red-tagging as individuals or groups labeled as rebels or terrorists vilifies anyone who stands up and speaks out against any anti-worker, anti-people, anti-poor policies. They immediately become targets of threats, harassment, and surveillance. Worse, it leads to the slapping of trumped-up charges based on planted evidence or extra-judicial killings.

But despite all of this, we will remain firm in upholding and defending BPO rights and welfare. We will never falter and we won’t let this pass. We will take appropriate legal action if needed to help stop the spread of this hate crime. And we will not be silenced.

We stand that any attack on BIEN is an attack on every BPO workers’ aspirations for living wages, job security, and better working condition. ###

The BPO Industry Employees Network vehemently condemns that red-tagging of our former National President, Lean Porquia, by one of the witnesses in the Senate hearing on November 3. During the hearing set by the Committee on National Defense chaired by Sen. Panfilo Lacson, a certain “Ka Amihan” claimed that Lean recruited her into the communist movement.

Under the leadership of Lean when he was BIEN’s President and part of the National Executive Board, none of our official meetings or public activities have nothing to do with the communist movement or related to armed communist insurgency. In fact, he was one of the pioneer members and rose to leadership because of his active participation in BPO workers rights advocacy.

During his term, he was instrumental in the formulation and spearheaded BIEN’s major campaigns and such as the drafting of the BPO Minimum Labor Standards, Let There Be Light (lighting of dark walk ways going to BPO hubs), Let It Flow (Bio-break) among others. He actively participated in BIEN lobby works with Congress for the passing of the BPO Workers Welfare Act and the Magna Carta for Call Center Workers Bill filed by the late Sen. Miriam Defensor-Santiago. He organized activities to raise awareness on BPO workers rights and welfare and at the helm of BIEN’s relief drive during the aftermath of Super Typhoon Yolanda in 2013. Then and now, he never failed in helping BIEN’s advocacy in promoting various workplace issues and protecting BPO workers’ rights.

It was not surprising that he will be red-tagged since his family is very active in cause-oriented groups in Panay region. His father, Jory Porquia, was the Iloilo City Coordinator of Bayan Muna was gunned down by suspected state agents on April 30. Before his killing, he was red-tagged and his faces are seen on posters hung in communities.

BIEN reiterates that labor rights advocacy is not communism; activism is not terrorism.

If the Senate hearing and NTF-ECLAC cannot discern the difference and does not even have the slightest idea of how to understand the difference, then the fabric of democracy will continue to deteriorate. It will continue to shrink the already limited democratic space if we do not stop demonizing dissent and criticism, quelling freedom of expression and opinion, and restricting freedom of association. These are among the reasons BIEN is opposing the Anti-Terror Law.

Our worst fears have been realized. The Anti-Terror Law will be used to as a dampened blanket to smother fire of opposing views and opinions from political dissenters and critical to government policies including people and organizations promoting valid and legitimate issues or advocacies.

BIEN believes that the Senate was used as a platform to put more harm on dissenters and critical to government by red-tagging. The Senate hearing was used as a tool by the NTF-ELCAC to further red-tag more people and organizations to intensify its baseless communist witch-hunting.  Ultimately, it failed to address the issue of red-tagging but rather added fuel to the fire.

This November 24, another round of hearing is set to discuss the issue of red-tagging. We remind the Senate and security cluster to stop perpetuating guilt by association and stop red-tagging as it may endanger life, liberty and security of any individuals. We appeal to fellow human rights workers and labor rights advocates to support our call: Hands Off Lean Porquia!

The BPO Industry Employees’ Network (BIEN) expressed its disapproval on DOLE’s Department Order 215 and Labor Advisory 28. DO 215 allows extended floating status of workers affected by the pandemic while Labor Advisory 28 reiterates non-exemption and no deferment of 13th month pay.

The group welcomed the decision of DOLE to released a reminder to employers about the payment of 13th month pay. However, the said advisory did not set out a clear guidance on how the 13th month pay will be computed in light of the implemented community quarantine on March, the group said.

“As we navigate to the waters of uncertainty caused by the pandemic, we expect that DOLE would go the extra mile and therefore create extraordinary measures such as giving full payment of 13th month pay as form of aid to workers in this extraordinary time.” explained by Mylene Cabalona, President of BIEN.

The labor group cited that the issuance of both the DO and Labor Advisory exacerbated the perennial problem of floating while hiring and in a no-work no-pay scheme.

“Regardless if it is plainly the issue of floating or extended floating, essentially it violates the right of every BPO worker to job security. BIEN constantly opposes any measures that put workers welfare in jeopardy because we know that BPO companies are bastardizing the law to gain more profit and to press down wages. Our experience in the recent community quarantines revealed that BPO companies intensified its campaign of mass floating and forced leaves against employees even if the industry remained operational.”  Cabalona said.

Cabalona further explained that their group rejects these measures made by DOLE in the context of how the government handled the pandemic so far.

“These measures have become additional burden rather than help to BPO workers. For example, Labor Advisory 28 which ran through the guideline on the computation and payment of 13th month pay failed to set a clear instruction on how it will cover workers placed on floating status or forced leave.” Cabalona explained.

The group noted that while the business sector is heavily affected economically, workers also took a financial toll under this pandemic.

At the onset of the community quarantine, DOLE crated measures that are always favorable to the BPO companies and at the expense of the workers. This is going to be a ‘nightmare before Christmas’ as BPO workers may not receive their 13th month pay in full because of Labor Advisory 28. DOLE even had the gall to create more nightmares by releasing a department order that literally allows extension of floating status and would make our Christmas grimmer. Obviously, DOLE has become ‘The Grinch’ who stole Christmas from BPO workers.

BIEN and other labor groups will troop to the DOLE main office in Intramuros, Manila on November 13 to call the attention of the agency on the negative impact of DO 215 to jobs security and to ask for the full payment of 13th month bonus as a form of financial aid to workers. Also, the group will hold a social media campaign highlighting these issues in the hopes to create engagement with fellow BPO workers and to gather support from them. 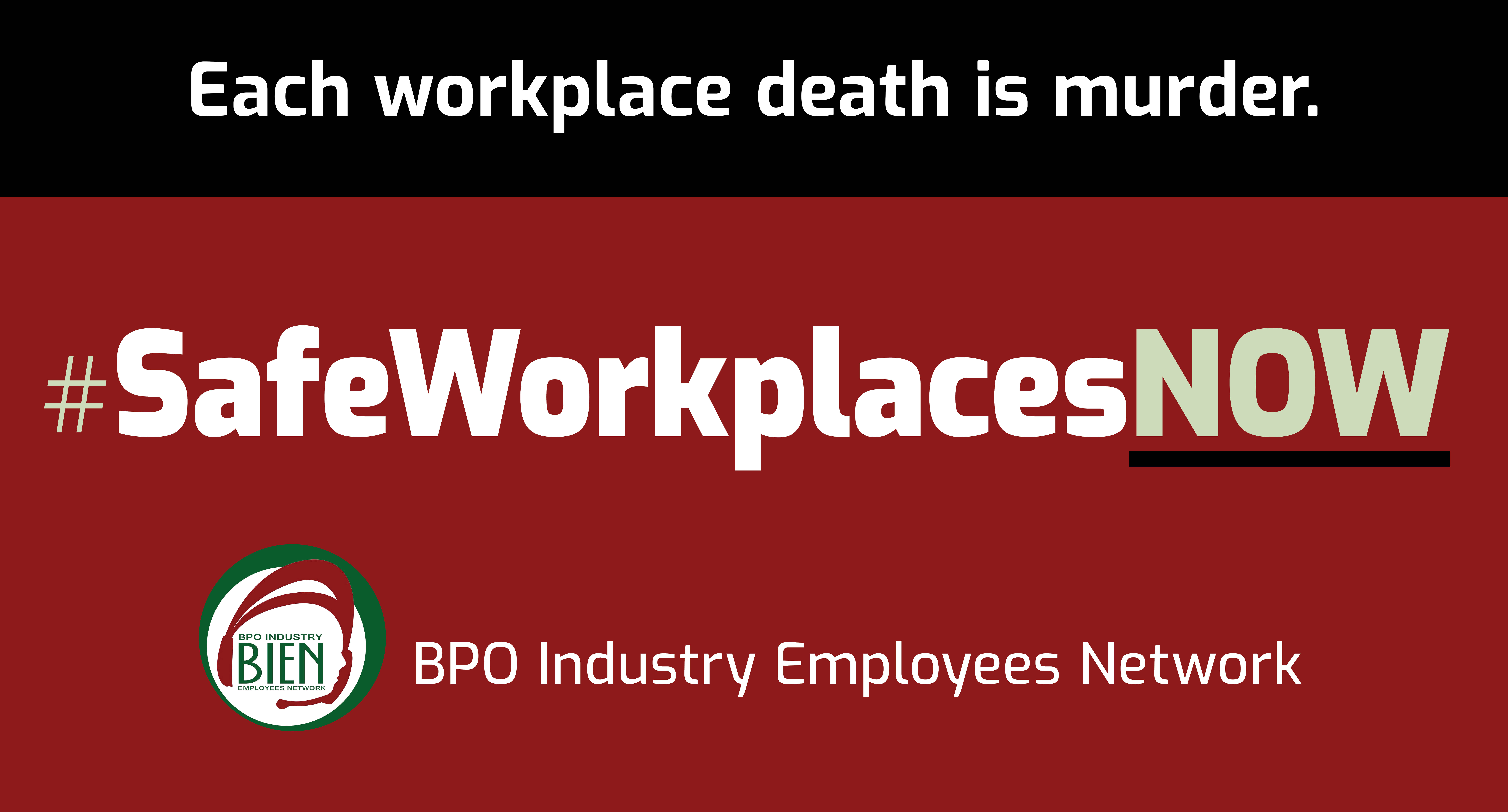